We held a parents workshop at GK. We invited Masami Iwase as a lecturer. Ms. Iwase has experience in a large-scale telecommunications company and emerging IT ventures across the United States. She has set up her own marketing agency called the MIW Group. She shared her experience of establishing entrepreneurship, parenting, and the lifestyle that today’s women aim for. 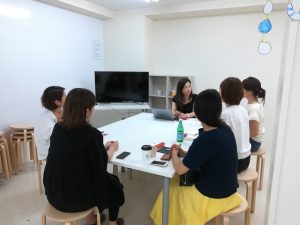 It’s Parents who Can See Their Child’s Strength

Q：I would like to ask about the future of  education. I personally think people in the future will be required to have global communication skills. Some parents are sending children overseas from an early age to build these skills. I wonder what kind of path is good for my children. How do I decide for my kids?

Q：I would like to ask about the future of  education. I personally think people in the future will be required to have global communication skills. Some parents are sending children overseas from an early age to build these skills. I wonder what kind of path is good for my children. How do I decide for my kids?

A：First of all, it is important that parents understand their children’s abilities, especially when they are little . The amount of words children can learn in early childhood are about 5,000. If you think about that, if children are learning 2 languages, it will be divided into 2500 words each.  Vocabulary affects the thinking process, so those who only have 2500 words,the way they express themselves may sound childish. If a child is a genius and has a high brain capacity, there are no problems acquiring a language as you can learn another 5000 languages ​​instead of 2500.
Speaking of sending children overseas, boarding school is popular track that most parents take, but parents need to know their children’s characters.  It is good if it matches, but if their child does not fit the schools culture, they may build loneliness which might affect their psychological development in the future. I think it is the mother’s job to be able to identify the environment that suits the child.

The other thing is that there is a possibility that language barrier problem might be  solved by the development of technologies such as AI. In that case, the important thing is not just building their English language itself but I think that it is also to build their child’s adaptability so they have the ability to walk properly whatever path they choose to go.

It’s about Quality not just Quantity

Q：When you are working, you always have limited time with your children. I do wonder how does one find out what my children’s strength  and what they like.

A：I think that the amount of time spent with children does not change much if you are working or not. Even if you are not working. children go to kindergartens and after school lessons, and when they are in elementary school, they spend most of the day at school, so the amount of time the family spends together after all is about the same.  I feel that there are many cases that the working mothers spend more meaningful and high quality time with their children. As for finding what your children like and what their strengths are can be found by seeing whether the child is crazy about their goal or not. For example, my son was playing baseball, but he didn’t get chosen as regular players. He always regretted it after the game and cried about it, but that doesn’t mean he started practicing at home. Then I figured “Oh, he doesn’t like it that much” .

The importance of Discipline

Q：I would like to know the difference of Discipline between the U.S. and Japan.

A：There are some differences between the two countries, one of the things is that you are lucky if you are a boy in America. Since women have power in the U.S. girls tend to get stronger and argument is hard to handle.  In my case, I think that the warm California climate helped me grow and become optimistic which I modeled the positive attitude towards my children. My upper(eldest) son is quite optimistic, and I don’t think he would have been like that if we lived in Japan. Many of Japanese people seems to have this image for American education that they are free to do whatever, but in fact the discipline in the United States is quite strict. The more privileged a family is, the more discipline they become. For example, in Japan, when there are children who are making noises at restaurants, people will just say “oh, they are children”, but in the United States, parents will tell children to behave. Even children who can not behave well at home will have timed out. In Japan, there are many cases adults are asking a favour to children, such as “Hi sweetie, could you do this?”, In the United States, this is rare. As the difference between adults and children is clear, adults are less likely to be controlled by children as in Japan.

Q：I work at an international company, and I feel the necessary to be global. How can I prepare my children to be global?

A：First of all, I think it is not global ≠ English. You are not global just because you can use English. However, I think that English ability is a big plus in Japan, because if you can speak English, you can get a  job with a better salary. There are also people who think growing up in the U.S is global, but I think it would be nice if you were born and raised in Japan and you can speak English as a Japanese and you can respond globally. Being able to represent as a proper Japanese when you are interacting with people from other countries. I think that is a global citizen. Lastly, I have raised some questions about my career.